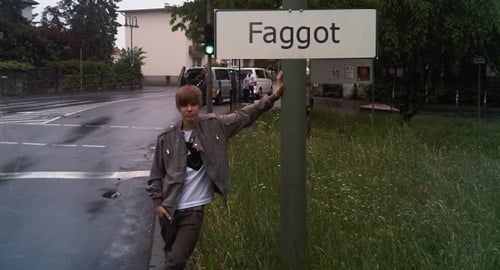 Unsheathe your saif fellow Celeb Jihadists and let it taste the blood of the infidels for our war with celebrities is at hand!

Like the prophecy has foretold an annoying talentless sexually ambiguous pop singer has struck first against us in this soon to be bloody struggle. While playing laser tag like a total dork over the weekend, Justin Bieber reportedly assaulted a 12-year-old boy simply because the innocent child pointed out the obvious fact that Justin is a “faggot”.

According to twisted accounts by the Zionist controlled media, the 12-year-old child was picking on 16-year-old Justin Bieber. When the child simply observed that Justin Bieber was a tremendous faggot, Justin decided to prove him right by slapping the kids hand, and running away.

Are we to expected to still our saifs while Justin Bieber goes around assaulting our fellow Celeb Jihadists? I say no, especially after viewing the video below released by one of Justin Bieber’s minions.

In the video below a strange looking girl with sharp metal teeth declares war against all those who oppose the tyranny of Justin Bieber, and issues terms for our surrender. She cites her powerful connection to people from “Europe” to strike fear into our hearts. 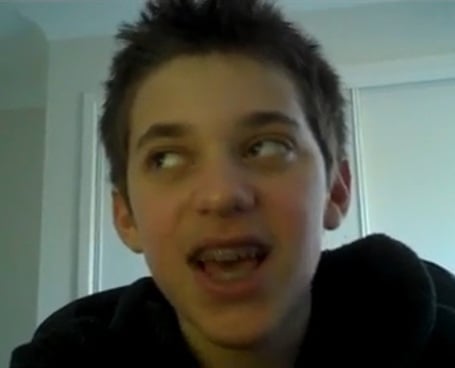 However, we will not surrender to these terrorist threats. For we have the power of Allah on our side, and we will triumph against Justin Bieber and his army of mentally retarded transsexual tweens. So do your worst you heathen freak for we are not afraid, and will continue to Jihad against Justin Bieber with even more vigor. Allahu Akbar!