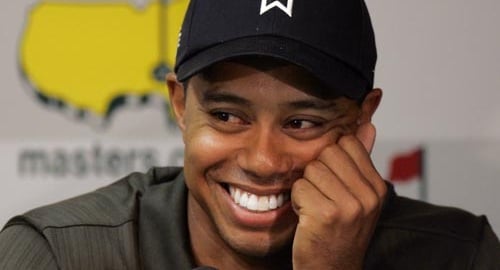 Tiger Woods made headlines today when he announced that his return to golf will take place at something called “The Masters”. That sounds like a pretty racist tournament to me, but what do you expect from a self-loathing black guy like Woods.

More importantly though we have heard from a very reliable source (who may or may not be a carnival psychic) that Tiger will make his triumphant return to banging whores behind his wife’s back sometime in early May. After a long period away from the game Tiger has decided he is ready to get back out there and get his golf club wet.

No one knows for sure how Tiger’s sex game will be affected by his extended absence from f*cking, but his fellow adulterers don’t seem to concerned. When asked how Tiger’s layoff may affect his laying ability, long time friend and former President Bill Clinton said, “Tiger is a once in a generation type of cocksman. I don’t see him having any problem getting back out there. His whore wrangling may be a little down at first, but once he gets back inside some stink he should be fine. It is just like riding a bike.”

So skanks of America start doing your stretches and waxing your naughty bits because one of the greatest man whores of our era will be back on the prowl in a matter of weeks.