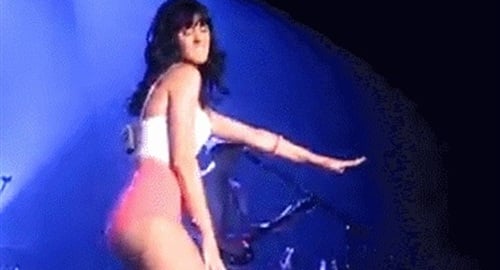 The music industry in the Western world has been degraded to a bunch of low grade strippers lip-syncing to computerized noise. Katy Perry is probably the best example of this new age pop star.

Katy is a marketing machine designed by the Zionists to sell sex to the masses. This becomes abundantly clear in the GIF below of Katy Perry simulating doggy style sex at her concert.

What does dressing like a filthy street walker and simulating doggy style sex have to do with music? Nothing! However, it provides stimulation to the crass infidel hoards to distract them from the illegal occupation of Iraq and Afghanistan, as well as the atrocities being committed by the great Satan Israel against the Palestinian people.

Way to go Katy Perry your filthy sex shows is a small part of allowing the evil Zionist empire to continue expanding. Luckily us Muslims are immune to your whore ways, and will continue to fight the imperialist crusaders no matter what kinky sex act you simulate on stage. Allahu Akbar!