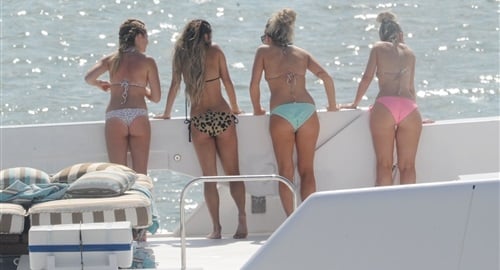 As you can see in the photos below, Vanessa Hudgens stole the show at “High School Musical” co-star Ashley Tisdale’s bikini bachelorette party.

For those who do not know a “bachelorette party” is an infidel wedding tradition in which the bride-to-be goes out with her girlfriends and tries to suck as much strange dick as possible before she is married and has to do it on the sly behind her husband’s back. Usually at these parties the focus is on the bride, but in this case Vanessa Hudgens’ bikini sluttiness completely captures the spotlight.

Yes despite Ashley Tisdale’s best effort flaunting her wonky tits and dumpy ass in a thong, Vanessa Hudgens posing on all fours and sucking on lollipops clearly makes her the star of this bikini bachelorette party.